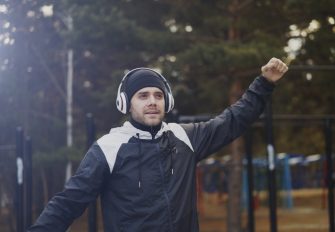 Music has become an integral part of our daily lives.  Beyond just listening to music on our personal devices, there is a constant soundtrack going around us in grocery stores, elevators, business offices and even when waiting on hold on the phone.  TV shows, for example, have gone from just using music for opening themes to now having music throughout to help set the mood and accentuate drama.

Wow!  Music sounds like a pretty powerful medium, right?!  It makes sense that the fitness industry has used this research to try to improve outcomes and keep people motivated to stay fit.  Technology companies design portable devices to enable runners and other athletes to take their preferred music along for the workout.  Walk into any gym and it’s likely you’ll be met with loud, driving, upbeat, music.

While we may think of music as purely entertainment, it turns out there is scientific evidence that it can actually help you exercise!  Multiple studies have examined various aspects of style and tempo and how it relates to exercise intensity, performance and duration.  Music is shown to have an, often sizeable, positive impact on exercise.  Here is a summary of a few key studies:

Despite the varied study settings and objectives, all showed that music can make a positive impact on a person’s exercise experience.  Larger studies may be conducted in the future to obtain more uniform measurements and data.   For now, we can see that there is enough evidence to show that music can help make a workout not only more fun, but also, more productive.  So, put the lullabies on pause, get your jams going and get moving!

If you have not been exercising and have questions about starting a fitness routine, your doctor of chiropractic can help you determine realistic fitness goals that are right for you.  If you don’t have a chiropractor, you can search a listing of TCA member doctors near you at https://www.tnchiro.com/find-a-doctor/.