TCA Legislative Successes Save Chiropractors
Over Half Million Dollars Annually

The 111th General Assembly has adjourned, cementing a successful session for chiropractic in Tennessee!

TCA lobbied more bills this session than it has ever lobbied before – and in a new General Assembly year which saw 4,669 bills introduced and a dizzying 1,314 committee meetings held!  Through a concerted effort by our members, TCA leadership and our professional lobbying team we overcame a mire of obstacles and opposition.  While only 1,822 bills found their way to the Governor’s desk or the bin, the TCA is proud to report that we were successful in passing 100% of our legislative agenda!

In addition to passing our Alternative to Opioids bill, which names chiropractic within the definition of “alternative treatments” per Tennessee law, TCA removed both the Massage Establishment License requirement for DCs (as well as MDs and DOs) effective as of May 10, 2019 and the Professional Privilege Tax in 2020.

The TCA was the driving force behind these changes saving well over half a million dollars annually for the chiropractic profession in Tennessee.

We MUST show support to legislators who made our victories possible this year and who are vital in 2020 efforts.  But first, we need PAC funds to make this possible.

Give to TCA PAC

The TCA PAC supports candidates running for State House or Senate, and helps to strengthen current relationships that are invaluable to the future of the profession in Tennessee.

There were numerous bills not specifically on our agenda, that TCA lobbyists monitored and addressed, which impact chiropractic. Nationally, we continue to monitor legislative developments impacting chiropractic as well.  Now, preparations begin to secure and solidify relationships on “the Hill” to ensure continued momentum for TCA’s 2020 legislative agenda!

Resources related to legislation impacting chiropractic are being finalized as a benefit to TCA members and TCA PAC contributors.

TCA Membership Dues At Work For You! 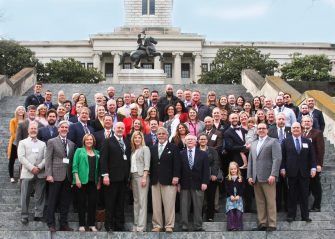 Member support enables a long list of TCA accomplishments such as the valuable work mentioned above. Think of how much more we could do if we had the support of all licensed DCs in TN…

The TCA has a responsibility to our members as the only voice for doctors of chiropractic in Tennessee and we use that platform to relentlessly advocate for good public policy.

2020 will bring an aggressive legislative session and the time to prepare is now. We will need a strong effort to address the ongoing insurance inequities, inclusion in programs addressing the opioid epidemic and defense to our scope, among other TCA objectives.

For roughly the cost of one dinner out a month, TN doctors who are not currently members can show their support and join others who are backing pro-active and defensive initiatives for chiropractic in TN. Plus, reap a wealth of benefits.

Why is the TCA Unique When it Comes to Lobbying?

Our legislators as decision-makers do not always have experience or access to information on how their constituents and patients of chiropractic might be affected.  It is our job as chiropractic advocates to educate our elected officials and be certain that they have the information they need to make the best decisions possible.

There is no shortage of paid lobbyists and special interests groups who aggressively try to influence Tennessee legislators; however, the TCA is the only statewide association advocating for chiropractic in the midst of numerous lobbyists for other provider groups, business interests, insurers and others.  While our strong team of TCA lobbyists speaks out for chiropractic on “the Hill”, state legislators are most responsive to their constituents – people who vote in their districts. They also feel the need to know that a specific issue is a priority in their community, and it takes the people who live and work in the community to sway them.

Why is Lobbying Necessary?

The Tennessee Chiropractic Association encourages informed and active participation in government, with the aim to ensure that chiropractic physicians’ voices are an important part of political dialogue on issues impacting the profession.

As sessions become more and more fast-paced, we cannot be guaranteed that legislators have had the opportunity to fully review every bill that comes before them for their vote.  It is our job as chiropractic advocates to educate our elected officials and be certain that they have the information they need to make the best decisions possible.

Legislators Need to Hear from You

Tennessee’s state senators and representatives come from diverse backgrounds; many are not healthcare experts and may have no chiropractic experience, yet they must vote on these issues when a bill comes before them.  As a healthcare expert, you are uniquely qualified to help your elected representatives understand the practical implications of healthcare policy proposals. It is vital that legislators hear from you.

What Can I Do?

It is the TCA’s goal to promote and secure passage of our legislative objectives by the state’s legislators.  To focus the tremendous grassroots power of the chiropractic profession, your TCA has developed a Legislative Ambassador network.  The aim of the program is to ensure that each and every member of the General Assembly has continual contact with, and input from, his/her local Doctors of Chiropractic.  If you have a personal or good working relationship with one of Tennessee’s House or Senate Members or would like to initiate one, we want to know as this can be critical in the communication process to urgent legislative issues.  The goal is never threaten or antagonize, but to build a relationship and influence discussion on the basis of your knowledge and understanding of the issue.

Below, the TCA has compiled a list to assist our members to be strong grassroots advocates for the chiropractic profession.