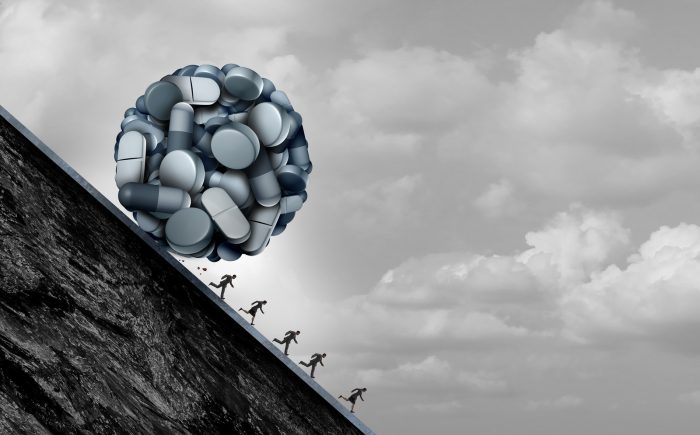 The pain became a daily part of Megan’s routine. When she became pregnant with her first child, she was taking opioid pain medication daily, but she was able to stop during the first trimester.

After her first pregnancy, Megan continued to have pain and began to take opioids again. Pregnant with her second child, Megan struggled to stop the medication. Seeking help, she found support from her husband, family and friends. However, the pain continued to rule her life, making stopping difficult.

The treatment of chiropractic care—or any other complementary therapy—was never provided as an option to Megan for her chronic neck and back pain.

Chronic Pain Is a Widespread Problem

Megan’s story is not an unfamiliar one. News stories about the opioid addiction abound. It is a major problem throughout the U.S., and it does not discriminate. We live in a society that is in pain.

According to the American Academy of Pain Management, 100 million Americans suffer from chronic pain.1 In addition to the reports of chronic pain, opioid medications have been overprescribed. Intended for pain associated with cancer and the end stages of life, opioids are less effective to treat noncancerous, chronic pain.2,3

The opioid crisis is not new. Its usage in the U.S. can be traced back to the late 1800s when morphine and heroin became readily available. During that time, the most commonly addicted were white females. In the early 1900s, opioids, such as heroin, were used as cough suppressants, and not much was known about the drug’s long-term effects.

As usage became widespread, it became apparent that opioids were addictive. In 1914, the Harrison Narcotics Act was initiated, and a tax was imposed on anyone making, selling or importing any type of opium. In 1924, heroin became illegal.4

In the 1980s, published articles attested to the safety of long-term heroin usage. An escalation of usage began, resulting in a significant impact on the country.

Are You Opioid Aware?

A wide variety of opioids can be prescribed within the following categories:

When opioid prescriptions are no longer available, many individuals begin using heroin, due to its low cost and ready availability.5

Prescription rates vary across the country. The highest overdose rates are found in West Virginia, New Mexico, New Hampshire, Kentucky and Ohio.6 Women are twice as likely to use prescription opioids as their male counterparts, and they tend to be between the ages of 25-54. A correlation between deaths due to opioid misuse and benzodiazepines has been found.7 Many patients are simultaneously prescribed both drugs.

One study found that women have been prescribed opioids for low back and pelvic pain during pregnancy even though the long-term effects were well known.8 The prevalence of low back pain and pelvic pain is common and ranges between 68 and 72 percent of pregnant women.9, 10 For chronic pain in pregnancy, the American Pain Society guidelines11 suggested that women be counseled regarding the risks and benefits of opioid therapy, with the recommendation that there should be little to no use during pregnancy.

The American College of Obstetricians and Gynecologists makes numerous recommendations to minimize opioid use and highlight nonpharmacological options for chronic pain.12 For those who are addicted, abrupt discontinuation of opioids during pregnancy can lead to preterm labor, fetal demise or fetal distress. Opioid agonist therapy with methadone or buprenorphine is the standard recommendation.

Infants exposed to opioid use may develop neonatal abstinence syndrome (NAS), which was first described in the clinical literature in the 1970s. In 2012 alone, 21,000 infants were diagnosed, a five-fold increase from the previous 12 years.

There is a high correlation between opioid exposure and death from birth to five years of age.13, 14 Opioid exposure tends to be accidental, such as a child accidentally ingesting a pill or being stuck by a heroin needle. Since infants and small children have a low body mass, even a small amount of exposure can have long-term and damaging effects.

Exposure tends to decline before it starts to elevate beginning at age 12 and increasing until ages 17-18, where it plateaus. Opioid use in adolescents is much different than in the younger counterparts, as it tends to result from leftover prescriptions found in medicine cabinets.13, 14

The Role of Chiropractic

Chiropractic practitioners have a very important role to play in assisting with the chronic pain crisis, as well as with addressing the public health concerns associated with opioid misuse, including:

In the case mentioned previously, perhaps chiropractic care could have helped Megan avoid using opioids had it been offered as option for her chronic neck and back pain.

1.     Institute of Medicine Report from the Committee on Advancing Pain Research, Care, and Education: Relieving Pain in America, A Blueprint for Transforming Prevention, Care, Education and Research. The National Academies Press, 2011.