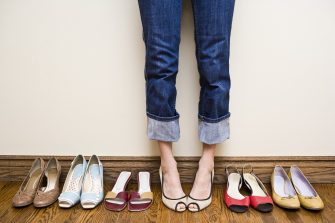 (NAPS) – Once might be a fluke, but when two Miss USAs in a row fall while walking in high heels, you know women everywhere have a problem.  Both tumbles happened during the evening gown competition in 2007 and 2008.

The much-noted spills point out the dangers associated with wearing high heels.   “Wearing them affects the entire body, particularly the knee, hip and spine,” said Gerard W. Clum, D.C., president of Life Chiropractic College West in Hayward, Calif.  “The abnormal weight bearing and stressful posture induced by high heels can strain both the lower back and the neck – not to mention the feet, ankles and knees.”

If high heels are a must, Dr. Clum advises not to wear them for more than two hours a day.  So where does that leave fashion-conscious women?  Well, no one’s saying you have to stick to flats the rest of the time.  Instead, doctors of chiropractic suggest choosing heels of two inches in height or less as a compromise.

Stretching leg muscles before and after wearing high heels will help you reduce the negative effects they can cause.  Also, choosing shoes with a wide variety of heel styles and alternating between them day to day is recommended.