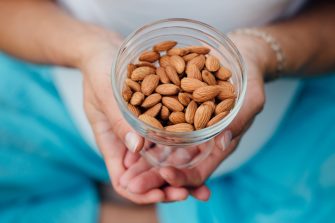 With their hint of sweetness, almonds are a fan favorite when it comes to nuts.  Popular as a stand-alone snack, they work great as a topping on everything from salads to ice cream, and green beans to bread.  You may have heard about their nutritional value, but do you really know how many health benefits have been linked to almonds?  Take a look!

A study published in the journal Metabolism Clinical and Experimental in July 2011, evaluated almond consumption compared to other foods and their effect on signs of osteoclast cells (specialized bone cells that break down bone tissue) in the blood.  A certain level of these cells is required for maintenance and repair of bone tissue, as well as regulating calcium levels in the blood.  However, too many osteoclasts can lead to excessive amounts of tissue being broken down, weakening the bones.

Serum was obtained prior to, and 4 hours after, the study meals and then used to culture human osteoclast precursors.  Researchers found that the serum from 4 hours after eating the almond meal had osteoclast formation that was reduced 20% compared to baseline before the meal.  The other test meals had no observed effect.  Researchers concluded this “provides evidence for a positive effect of almonds on bone health.”

Research has shown that almonds may reduce the rise in glucose (blood sugar) and insulin levels after meals. A 2006 study published in the Journal of Nutrition,  “Almonds Decrease Postprandial Glycemia, Insulinemia, and Oxidative Damage in Healthy Individuals,” also used serum before and after eating to determine the effects of consuming almonds.  Healthy subjects ate two control meals (bread) and three test meals (almonds, bread, parboiled rice and instant mashed potatoes).  Butter and cheese were used to ensure all meals were balanced in carbohydrate, fat and protein.

Researchers observed both the rice and almond meals had significantly lower glycemic indices, meaning lower blood sugar and insulin levels, compared to the potato meal.  Additionally, they observed raised protein thiol concentration after the almond meal, signifying less oxidative protein damage.  In contrast, serum protein thiol concentration went down after the control bread, rice and potato meals.  The researchers put forward that reducing postprandial glucose excursions (PPGEs), or the change in glucose concentration from before to after a meal, may in turn also reduce the risk of oxidative damage to proteins.

Almonds and other nuts have been shown to have anticarcinogenic effects.  One study, in a 2015 issue of Gynecologic and Obstetric Investigation evaluated, “The protective effect of peanut, walnut, and almond consumption on the development of breast cancer.”  For the study, researchers analyzed both clinical characteristics and lifelong consumption of peanuts, walnuts and almonds for 97 breast cancer patients and 104 control subjects.

They found that while low and moderate consumption of these foods did not have a significant impact on breast cancer rates, among those with high consumption of peanuts, walnuts, or almonds, the risk of breast cancer was 2-3 times lower than the control group.  They concluded that a higher level of eating almonds and the other nuts involved in the study provided a protective factor for the development of breast cancer.

Regularly eating almonds may help boost levels of HDL cholesterol while simultaneously improving the way it removes cholesterol from the body.  In a publication released in 2015 entitled, Journal of Nutrition, a study was published that investigated the impact of dietary almonds on HDL cholesterol in Coronary Artery Disease patients.  Authors noted that over 50% of coronary artery disease (CAD) patients continue to have low HDL, even when their LDL is under control.

They divided 150 CAD patients into 3 groups.  Two of the groups were given a specific variety of almonds. They were told to soak them overnight, remove the skin and eat them prior to breakfast (10g/day).  Blood samples and other clinical data was collected at the start of the study, after 6 weeks and again after 12 weeks.

There was no difference in results from the 2 types of almonds and no significant change in dietary patterns, body weight, or blood pressure among any of the 3 groups.  However, both groups that consumed almonds experienced a significant increase in HDL cholesterol.  The increase was 12-14% for week 6 results and 14-16% higher for the week 12 results.  Additionally, total cholesterol, triglycerides, LDL cholesterol and other measures for abnormal lipid metabolism in CAD patients, were reduced in both almond groups.

A study was published in the June 2010 issue of the Journal of the American College of Nutrition examining the impact of “an almond-enriched American Diabetes Association (ADA) diet” on insulin sensitivity and other cardiovascular risk factors.  Researchers recorded fasting glucose, insulin, total cholesterol (TC), low-density lipoprotein cholesterol (LDL-C), high-density lipoprotein cholesterol (HDL-C), triglycerides and blood A1c levels at the beginning of the study.  This was repeated at weeks 4, 8, 12, and 16.

The intervention group received 16 weeks of outpatient dietary counseling featuring an ADA diet containing 20% of calories from almonds.  This was approximately 2oz per day.  After results were compiled, it was revealed that the almond-enriched group showed a larger reduction in insulin and insulin resistance compared to the nut free group.  Additionally, the almond group experienced “clinically significant declines” in LDL Cholesterol.  No changes were noted in BMI, blood pressure or other cardiovascular risk factors.

With all these health benefits, great taste and versatility in recipes, it’s easy to see why almonds are so popular.  When you think of getting a snack, consider a handful of almonds in place of that sugary treat.  Your body will thank you for it!

If you have a question about ways to improve your diet for better health, talk to your chiropractor at your next appointment.  With training in nutrition and wellness, your chiropractor is an excellent resource to learn how you can take simple steps, like eating healthy snacks like almonds, to reach your health goals.  If you do not already have a chiropractor, you can find one near you at www.tnchiro.com/find-a-doctor .

Please note: The information and recommendations appearing on this page are appropriate in most instances, but they are not a substitute for a diagnosis by a specialist.  If you have any reason to believe you may be allergic to nuts, consult your doctor prior to consuming almonds or other nuts. There are a number of individual factors that may affect your personal dietary needs.  This is why it is important to discuss your personal health status with your health care providers before making major changes in your dietary and exercise habits.  For specific information concerning your health condition, consult your chiropractor.