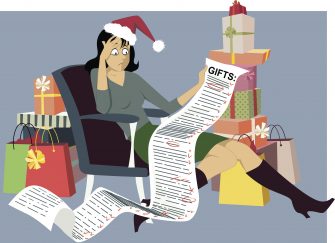 The American Psychological Association (APA) conducted a nationwide stress survey in 2006 as well as a holiday stress survey in October of the same year.  They related that close to 50% of women have more stress during the holidays.  While it’s not surprising that stress levels were higher, it was interesting to note that the survey also revealed that women were actually doing LESS to manage that stress.  Additionally, there was a significant difference between men and women.

It is widely accepted that stress has negative effects on both psychological and physical health. Regardless of the calendar date, when that stress is not mitigated in a healthy way, the door is open for unhealthy coping behaviors.   This may lead to a temporary stress reduction, but will ultimately be creating other problems which will cause additional stress. Russ Newman, Ph.D., J.D., executive director for professional practice, APA states: “Research shows that stress, and the unhealthy behaviors people use to manage it, contribute to some of our country’s biggest health problems such as obesity, heart disease and diabetes. So it’s imperative that people take steps to address issues … in healthier ways….. The effectiveness with which people manage stress — especially women during the holidays, given their increased stress levels — is critical to long-term mind and body health.”

Adults who have higher rates of stress, have lower rates of psychological and physical health.   Women who are stressed are more likely than men to report being in fair or poor” health.  Specific complaints and conditions reported include:

How prevalent is this problem?  Very.  In fact, 31% of the female respondents reported using food to deal with stress during the year, compared to 19% of the male respondents.  During the holiday season, “comfort eating” rises by 10% for women and 6% for men.  Additionally, 28% of the women had turned to alcohol to cope during the holidays.  There were a few other notable differences between the genders.

Unfortunately, it seems that women seem to expect stress as a normal aspect of the season.  Planning and shopping for holiday gatherings, extra cooking and purchasing gifts are added to the normal work/home routines. These added tasks leave many women feeling like they can’t stop to relax and take care of themselves.

It is important to practice self-care throughout the year, but especially during times of higher stress such as the holidays.  Talk to your chiropractor about a good form of physical activity that would be safe and effective for you as well as about good nutrition.  Your chiropractor can help alleviate the symptoms of tension headaches as well as muscle pain from tension or activity.   Proper alignment will help your body perform at optimum levels, allowing you to better manage the many activities and stresses of life.