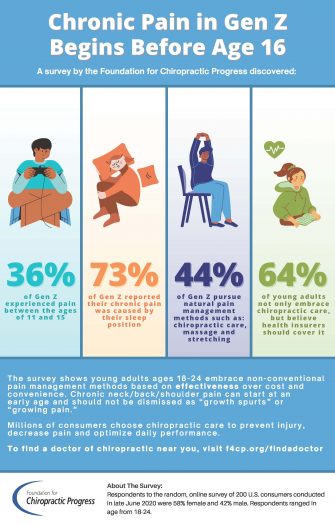 San Jose, CA. – August 5, 2020 –The majority of Americans in Generation Z, ages 18 to 24, reported they first experienced chronic neck, shoulder or back pain when they were younger than age 16, according to survey results released today from the Foundation for Chiropractic Progress, a not-for-profit organization dedicated to educating the public about the value of chiropractic care.

To manage this pain, 200 surveyed Americans indicate that 44% embrace a combination of drug-free, natural pain management methods, such as chiropractic care, massage and stretching, as well as conventional methods such as visiting a medical doctor and/or taking medication.

The top reason Generation Z pursues non-conventional pain management methods is effectiveness. Nearly 31% of survey respondents stated the efficacy of drug-free, natural pain management methods was a more important deciding factor than cost (24%) and convenience (20%). That is also likely part of the reason why more than 63% of survey respondents reported being “somewhat” or “very” interested in chiropractic care while 17% have already received such care.

“We are very encouraged by the results of our survey, which explores an only marginally studied topic among this younger generation,” said Sherry McAllister, DC, executive vice president of the F4CP. “Younger Americans seem to be recognizing that pharmacological pain management methods alone deliver only short-term relief without addressing the underlying causes of chronic neuro-musculoskeletal pain that can often start at an early age. Hopefully, the awareness of the effective, long-term pain relief and mobility benefits of chiropractic and other types of non-pharmacological care will continue throughout their life to relieve pain, but also to prevent it and its associated causes.”

School sports and other frequent physical activity poses an added risk of injury or damage to joints, ligaments and tendons leading to pain. While parents or other clinicians may attribute pain at this young age to “growth spurts” or “growing pain,” it is best to err on the side of caution and get helpful advice to ensure patient health.

Generation Z’s early pain onset demonstrates the importance of engaging in a careful consultation with a qualified clinician, like a doctor of chiropractic (DC), who specializes in neuro-musculoskeletal pain to carefully determine the root cause and develop an evidence-based plan to alleviate the pain and protect the affected area.

“For most younger patients, pain relief and recovery can be accomplished through safe, drug-free care methods where they can then continue to participate in sports and other activities and improve their performance,” Dr. McAllister explained. “This is another reason why so many professional sports teams and the U.S. Olympic athletes have a doctor of chiropractic on their training staff.”

Other noteworthy results from the survey include:

“While chronic pain is mostly associated with older adults, the results of this survey indicate that as an industry, healthcare providers need to recognize and address the early signs of muscle and joint dysfunction much sooner in younger patients,” Dr. McAllister concluded. “With a safe, effective and drug-free care plan in place, providers can help establish the habits and behaviors that guide younger patients toward a lifelong path of optimal health and well-being.”

About Foundation for Chiropractic Progress

A not-for-profit organization, the Foundation for Chiropractic Progress (F4CP) informs the general public about the value of chiropractic care and its role in drug-free pain management through award-winning educational campaigns. Visit www.f4cp.org; call 866-901-F4CP (3427).