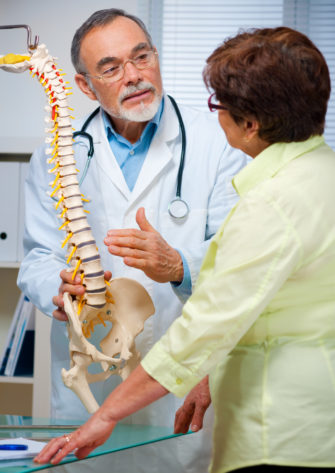 Back pain is a major health problem and cause of disability around the world which brings with it, a very hefty price tag.  There are numerous studies showing the cost-effectiveness of chiropractic care as a conservative approach to pain management.

One of these of particular note is a Swiss survey conducted in 2007 which revealed that almost half the population (43%) had experienced back pain that year, with a third of them reporting decreased productivity at work due to the pain.  They also found it was ‘breaking the bank’ as an estimated 3.2% of the country’s gross domestic product was being spent treating musculoskeletal conditions.

In the Swiss healthcare system, patients can initially seek medical care from a medical doctor (MD) or a chiropractor (DC).  From there, they may be referred to other specialties as the patient’s condition warrants.

In 2011-2013, researchers conducted a retrospective review of patients who called a telemedicine consultation service seeking advice for spinal, hip, or shoulder pain, and were advised to see an MD or DC, and who did seek treatment within 4 months of the call.  The goal was to determine differences in outcomes, patient satisfaction and related health care costs for patients who went to an MD first with patients who went to a DC first.

A questionnaire was mailed to patients 4 months after their call to the telemedicine service for them to rate their pain at that time as well as recall what their pain level had been initially.  They were also asked about missed work, satisfaction with care as well as what diagnostic procedures and treatments were done.

Researchers pulled cost information from a large insurance company to match the procedures that the patients had received.  There were 403 respondents who reported seeking care from an MD first, and 316 who reported seeing a DC first.

When baseline characteristics were compiled, some interesting facts emerged.

Patients who initially sought care from an MD were:

Patients who initially sought care from an DC were:

There were also remarkable differences in their results.

Patients who initially sought care from an DC:

Total cost for those seeking chiropractic care first, was 40% lower than when medical treatment was the first choice.  A few factors may play into this.  Chiropractors can offer multiple non-pharmaceutical treatments in their office, where an MD would typically have to refer the patient to another provider for therapy.  Additionally, chiropractors often perform x-rays in their office when needed.  By contrast, some MD’s have to send a patient to a hospital for those services.  Patients who saw an MD first were more likely to require expensive diagnostic testing such as MRI and CT scan.

Other findings of cost-effectiveness showed that those who saw a DC first:

Study authors concluded that patients with spinal, hip, and shoulder pain “had modestly higher pain relief and satisfaction with care at lower overall cost if they initiated care with DCs, when compared with those who initiated care with MDs… Restrictive models of care in which patients are required to contact a medical provider before consulting a chiropractic provider may be counterproductive for patients experiencing the musculoskeletal conditions investigated and possibly others.”

This study gives evidence that many patients with musculoskeletal complaints would do well to seek chiropractic care as their first option.  Chiropractors are trained to perform a through exam and health history and can refer to other providers when the patient’s condition warrants it.  They can also work in concert with other providers to ensure that the patient receives the best care with the lowest risk possible.

Make your health care dollars stretch while getting highly effective, conservative care!  If you, or a loved one, are experiencing pain, schedule an appointment with your doctor of chiropractic to see how you could benefit from chiropractic care.  If you do not have a chiropractor, you can find a TCA member doctor at www.tnchiro.com/find-a-doctor.

This article is being shared as part of TCA’s
“Realign Your Thinking” public-awareness campaign –
helping Tennesseans understand what chiropractic care offers
and the positive role it plays in the overall health care system.