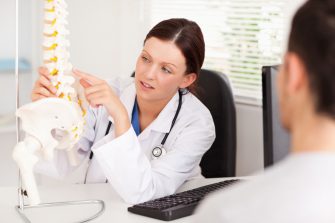 A push in the 1990s to pharmaceutically address pain management led to the current opioid epidemic.  The high prescribing rates of providers of pain medicine, surgery, and physical medicine/rehabilitation are not surprising: however, almost half of all opioid prescriptions are written by primary care physicians.

The evidence for opioids having a positive effect on chronic pain function or quality of life is scarce.  On the contrary, long-term usage, especially at higher dosages, is linked to a number of negative results including: overdose, misuse, abuse, tolerance, physical dependence, increased sensitivity to pain, constipation, nausea, vomiting, drymouth,  sleepiness, dizziness, confusion, depression, anxiety, itching, sweating, and even lower sex drive and energy in men due to reduced testosterone levels.

According to a MMWR Morb Mortal Wkly Rep 2017, the risks of tolerance, abuse and dependence is so great, especially among opioid-naïve patients, that even a single day of opioid exposure is associated with a 6% chance of being on opioids a year later. The risks increase quickly with each day, more than doubling in a week (13.5% at 8 days) and rocketing to 5 times the original risk in just a month (29.9% at 31 days).

Along with extended usage, also comes higher risk of overdose with thousands losing their life each year.  According to the Centers for Disease Control and Prevention (CDC) Opioid Data Analysis and Resources, there were more than 17,000 drug overdose deaths involving an opioid in the US in 2017.  That is 46 people every day!

Given the severity of the opioid crisis, it is clear that something must be done to non-pharmacologically address pain management, as the number of people with chronic pain complaints has not decreased.

There is a new drive to evaluate alternative pain treatment options, chiropractic being one of the most prevalent.  In 2017, the American College of Physicians issued guidelines recommending clinicians and patients initially choose nonpharmacologic treatment such as: heat therapy, massage, acupuncture, spinal manipulation (as performed by chiropractic physicians), exercise, rehabilitation therapy and low-level laser therapy.  When assessing the potential harm of various treatments, the guideline concluded that the type of care administered by chiropractors (spinal manipulation, exercise, and massage) posed no serious threat and was associated with only transient “muscle soreness.”

Various studies have reported on the reduced usage of opioids among those who receive chiropractic care.  In one such study, researchers analyzed health claims data from New Hampshire to determine the association of chiropractic utilization and the usage of prescription opioid medications.  This was a particularly dire issue since in 2015, NH had the second highest age-adjusted rate of drug overdose deaths in the US – more than double the national rate.

Researchers utilized the all payer claims database that is administered by the NH’s Dept of Health and Human Services and narrowed criteria to adults with non-cancer related low back pain.  They created two subject groups nearly identical in size and gender: Recipients who had at least 2 visits with a chiropractor for a primary complaint of low back pain, and Non-recipients who did not receive care from a chiropractor.

Researchers compared average annual charges per person.  Across the board, Recipients had significantly lower charges compared to Non-recipients.  This was true for clinical services (services provided in an office visit associated with low back pain diagnosis), opioid prescriptions as well as combinations.

They acknowledged that a portion of the difference may be related to individual beliefs, attitudes, and predisposition to use prescription medications.  Additionally, chiropractors offer recommendations for diet and exercise in addition to the spinal manipulation and other modalities.

Given the multitude of risk factors associated with opioid usage and the proven safety of chiropractic care, it is understandable why so many patients are utilizing #chiropractic1st when faced with low back pain and other musculoskeletal issues.  The best way to reduce risk of misuse and abuse of opioids, is to avoid and/or limit the initial exposure.  For many, chiropractic has been a great method of accomplishing this while still getting relief for their pain.

If you, or a loved one, are experiencing low back pain, schedule an appointment with your chiropractor today!   After a thorough exam and consultation, your doctor will recommend the best course of treatment for your specific condition and needs.  Chiropractors work in conjunction with other health care providers as needed to give you the highest quality care and the best chance for success.  If you do not have a chiropractor, click here to find one near you.

Learn more about how chiropractic can help you with back pain as well as other conditions at https://www.tnchiro.com/research/