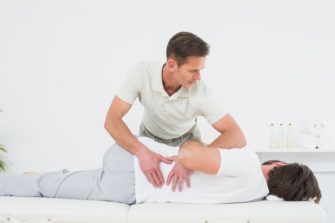 Low back pain is an all too common cause of pain and disability.  Historically treated with extended bed rest and occasional spinal support, numerous medications have been added as a common treatment option in recent decades, including opiates.

Mechanical methods of treatment have been used in many cultures throughout history.   The longevity of this type of treatment suggests there is a benefit and scientific data continues to become available showing its effectiveness.

Swedish researchers reviewed numerous previous studies regarding spinal manipulation, manual therapy, and muscle stretching as related to spinal pain.  Their hypothesis was that “manual therapy with steroid injections, in the early phase as well as during the later follow-up, facilitates recovery and reduces pain, disability and drug consumption more effectively than conventional treatment in primary health care.”  The researchers placed special importance on the differences between the two treatment groups during the early phase, since major effects from the steroid injections were not to be expected until the 3rd week.

The study was conducted at six health care centers with focuses on primary health care or occupational health, between February 1988 and April 1989.  Subjects were aged 20-60 with acute or sub-acute low back pain who did not require surgery or rheumatological care.

Study participants were assigned to 1 of 2 study groups and were told both would provide rapid treatment. The groups were similar with regard to age, sex, occupation, education, previous tow-back pain problems, previous treatment, sick-leave, findings at the physical examination, quality-of-life score, presence of common symptoms, disability rating and pain score.

Patients in the experimental group were treated at a rehabilitation clinic while the conventionally treated control group patients were treated at the same health care center where they were initially recruited.

Therapists were given freedom to treat as often as needed for each patient.  Patients in the experimental group were treated with manual manipulation or mobilization techniques.  Additionally, most received muscle stretching and were taught stretching exercises to do at home.  Some patients received auto traction and/or steroid injections and local anesthetics.  Patients were also given training to improve strength, coordination and endurance.  All treatment was ceased when the patient had recovered or when no further improvement was expected.

Patients in the conventional treatment, control group, received active, optimal and standardized care.  The therapeutic strategy included educating patients regarding their condition, adverse effects of inactivity and sick leave and encouragement to participate in physical therapy and other activities.

A total of 101 subjects participated in the study.  In addition to the observations during treatment, standardized phone interviews were conducted at 3, 7, 14, 21 and 90 days after treatment began.   Researchers found that both in the early phase of treatment, as well as the 90 days follow-up, patients in the experimental group who received manual therapy reported:

They conclude that together these factors indicate “this type of treatment is superior to conventional treatment.”

In the last couple decades, research studies have continued to show the benefits, cost-efficiency and safety of manual therapy such as that provided by chiropractic physicians.  As with other health care fields, medical technology advances are bringing about improved training for today’s chiropractors.  The support for spinal manipulation and benefits of adjunct modalities continue to evolve with the knowledge that ongoing research provides.

Talk to your doctor about how you can benefit from conservative, chiropractic care for low back pain as well as headaches and other musculoskeletal issues.  If you don’t have a chiropractor, you can click here to find a TCA member near you.

This article is being shared as part of TCA’s
“Realign Your Thinking” public-awareness campaign –
helping Tennesseans understand what chiropractic care offers
and the positive role it plays in the overall health care system.