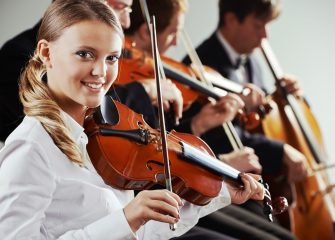 It is widely understood that there is an injury risk associated with sports activities, but many people do not think about the injuries that can happen as a result of seemingly innocuous activities such as playing a musical instrument.

While they are not being tackled or pushing their boundaries of strength, speed or endurance, musicians have activity-related woes of their own. Since they often perform the same movements over and over for extended amounts of time on instruments which were mostly designed with sound in mind, not ergonomics for the musician, hands, wrists, elbows, shoulders, neck, jaw and mouth injuries are not uncommon.

Recognizing a need for more research to explore correlations between these injuries and musicians, Dutch researchers performed a study to compare musculoskeletal complaints of musicians with those of non-musicians.

Two segments of study participants, students ages 18-30, were chosen for the comparison.  These subjects were each affiliated with one of four higher learning institutions: The Royal Conservatoire (The Hague); the CODARTS University for the Arts (Rotterdam); the Amsterdam School of the Arts; and Leiden University.  Musicians with a classical instrument as their main subject and medical students were invited to complete an online questionnaire.  In the end, 74 music academy students and 494 medical students were included.

Researchers noted a difference in the distribution of instruments played by the medical students when compared to the music academy students.  This is important because the variety of instrument size and shape, requires diverse positions and techniques which may lead to an assortment of conditions.  At the level of which these participants were in study, considerable amounts of time would be spent in independent practice, ensemble rehearsals and performances during which they would repeat strenuous movements required to play their instrument, sitting in a non-ergonomic position.  Some may play 1300 hours a year.  Instruments which require the most non-ergonomic positions were dispersed differently within the two segments. Bowed String and Woodwind instruments held the highest number of music academy participants, while Plucked String, Percussion and Keyboard instruments held the highest number of participants among medical students.

Additionally, a significant difference in types of complaints was noted.  Music academy students were more prone to issues related to the elbows, wrists, hands, neck, shoulders, upper back, jaw and mouth.  Meanwhile, the medical students had more complaints related to the hips and knees.  Low back pain complaints were similar between the groups.

While the total sample size for this study is small, there is a clear differentiation.  The study supports previous research that the type of musical instrument played is a known risk factor for musculoskeletal complaints for musicians.  Further, it suggests that mechanical overuse may be a vital factor in the potential development of these issues.

While prevalent in the general population, this study demonstrates that the rates of musculoskeletal complaints are higher among musicians, especially complaints in the upper body and extremities.  Due to this, it is important for musicians, their teachers and their health care providers to be aware of the propensity to develop these conditions.  The instrument itself is unlikely to change.  However, with proper exercise and stretching, musicians may be able to prevent or minimize these conditions.

If you play a musical instrument, share this information with your chiropractor at your next visit.  By analyzing your playing posture and positioning, your doctor can better anticipate what musculoskeletal conditions you may be at higher risk for and develop a prevention plan for you.  Caring for your unique postural and performance needs now will allow your music to continue far into the future.  If you don’t have a doctor of chiropractic, you can click here to find one near you.