(updated 4/13/22)
The TCA joins with our national counterparts in engaging Medicare patients to help in contacting U.S. legislators in support of Chiropractic Medicare Coverage Modernization Act (H.R. 2654 and S. 4042).  This is legislation that would ensure that Medicare patients have full access to all the services a chiropractor can provide under his or her state’s chiropractic scope of practice. Since it was introduced in the U.S. House of Representatives on April 19, 2021 and its companion bill introduced in the Senate on April 7, 2022, states have been working to secure co-sponsors for this bipartisan legislation. To date, one co-sponsor has signed one in Tennessee, Rep. David Kustoff.  Take action!  Help us gain support for H.R. 2654 and S. 4042!

This important legislation would allow Medicare beneficiaries access to the chiropractic profession’s broad-based, non-drug approach to pain management, which includes manual manipulation of the spine and extremities, evaluation and management services, diagnostic imaging and utilization of other non-drug approaches that have become an important strategy in national efforts to stem the epidemic of prescription opioid overuse and abuse.

As the nationwide campaign to gain co-sponsors continues, we urge all TCA Members, doctors of chiropractic and Medicare patients to email your U.S. Representative and your U.S. Senator TODAY and ask him or her to co-sponsor H.R. 2654/S. 4042!

To best serve their senior patients, chiropractic physicians must be allowed to practice and be reimbursed to the fullest extent of their licensure, training and competencies. Since the chiropractic profession was first included in Medicare in 1972, Doctors of Chiropractic and their patients have been burdened by arbitrary limitations that lack any scientific or sound policy justification. Research demonstrating positive patient outcomes and cost-effectiveness resulting from chiropractic care have advanced private coverage and state licensure to meet patient needs.  Click here to download the TCA H.R.2654 Medicare Advocacy for Patients poster to post in your office for reference on how they can support this effort.

The federal Medicare program, which serves as a model for private insurance plans, currently serves more than 55 million individuals. Various projections forecast the number of people age 65 or older increasing by about one-third over the next decade. Chiropractic inclusion in Medicare was established in 1972 and has seen little change since then, other than elimination of the X-ray requirement in 1997.  H.R. 2654/S. 4042 is bipartisan legislation that would allow TN Medicare beneficiaries to receive the full range of chiropractic care, not just manual manipulation of the spine to correct subluxation, as has been the case since 1972.

The TCA is pleased to report that Congressman David Kustoff of Tennessee’s 8th district has signed on as co-sponsor of H.R. 2654.  His decision to add his name can be credited, in part, to the outreach and information provided to him by his West TN chiropractic constituents. 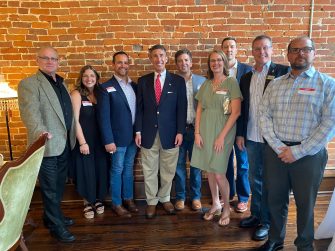 “As DCs, we must continue to build relationships with our legislators to better educate them on what we do and how we create value in the marketplace,” said TCA President Dr. Brock Martin of west Tennessee, who joined with other TCA Members in June to host a local event for Rep. Kustoff. “These relationships make a difference!”

Now, efforts are taking place in the 2nd and 6th U.S. districts by groups of TCA Members in east Tennessee and the Cumberland Plateau. Working to help provide information and foster relationships with Congressmen Tim Burchett and John Rose, these doctors are hopeful that they will be able to answer their questions regarding the bill and gain their signature as a co-sponsor. For information on hosting a local event for your U.S. Congressman, email the TCA.

Quickly and easily send your email using the quick link below.

Additional talking points may be found here. Thank you for supporting this effort!