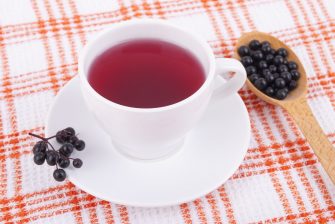 Upper respiratory symptoms that accompany many cold and flu strains can range from slightly annoying to downright miserable.  As late as 2006-2007, antibiotics were still being prescribed to a little over a quarter (28.6%) of outpatient visits with a diagnosis of the common cold.  However, antibiotics are known to not be beneficial in treating viral infections and their use in these instances may be contributing to the increase of antibiotic resistant bacterial infections.

Therefore, the practice of prescribing antibiotics for colds, flu and other viruses, is declining.  Instead, there is a renewed search for other options, often looking back historically to more natural remedies.  Traditionally, the berries of the black elder plant (Sambucus nigra) have been touted for use in treating cold and flu symptoms.

Research shows that supplementation with elderberry is indeed a viable treatment with many natural benefits.  The naturally occurring pigments in elderberries can be detected in blood plasma of individuals who have ingested the berries and have been shown to boost immune function as well as anti-viral effects.

A study published in February of 2019, Complementary Therapies in Medicine, evaluated 137 small studies in a meta-analysis using criteria to identify four key studies which were included in order to better measure the effects of elderberry supplementation on upper respiratory symptoms.  All of the key studies relied on a self-reporting instrument to document and quantify upper respiratory symptoms such as fever and sinus congestion.  One of the key studies utilized the Jackson scale which assesses sneezing, nasal obstruction, nasal discharge, sore throat, cough, headache, chilliness and malaise, in order to distinguish symptoms from a common cold compared to other causes.

Symptoms were documented at baseline and a minimum of once per day while symptomatic.  Three of the studies examined verified influenza cases or cases with symptoms “consistent” with influenza.  The fourth study examined the effects of elderberry on upper respiratory symptoms associated with the common cold.

Further, elderberry supplementation appeared to be MORE effective at reducing duration and severity of symptoms due to influenza.  Another study, published in The Journal of Alternative and Complementary Medicine, reported “over 93% of patients treated with [a standardized elderberry extract] saw significant improvement of the symptoms, including fever” in only 2 days.  In contrast, 91% of the control group experienced improvement within 6 days. (6)

Only two of the studies included participants who had received a flu vaccination.  The effects of elderberry supplementation did not appear to be significantly altered by vaccination status.

The meta-analysis researchers note that elderberries contain certain chemicals which can produce gastric issues such as nausea, vomiting and diarrhea, especially in children.  These chemicals occur less in the berries than other parts such as the bark and leaves of the plant but can vary due to growing conditions and varieties.  They point out that the chemicals in question are volatile and “risk of toxicity is eliminated when the berries are cooked or otherwise exposed to heat, making sufficiently cooked elderberry products safe to consume.”

All of the key studies reported usage of standardized, commercially available, elderberry extract.  No gastric issues were reported in these studies.  However, caution should be used if an individual chooses to utilize home prepared products.

While study sizes were small, the consistency of results led the meta-analysis researchers to conclude “supplementation with a standardized elderberry extract is significantly effective at reducing the total duration and severity of upper respiratory symptoms.”  They further assert that while the effect is larger among patients with influenza, all patients experience a reduction in symptoms regardless of the underlying cause.

For those with upper respiratory symptoms due to viral infections, these findings show the benefits of using elderberry supplementation as an alternate approach that could reduce antibiotic misuse, and in routine cold and flu cases, serve as a potentially safer alternative to prescription or over-the-counter medications. A 2020 review published in the journal Phytotherapy Research, reported that an examination of safety data and literature, “revealed no reports of significant adverse effects for short-term use of commercially available extracts.”  Further, there were “no reported herb–drug interactions.”

Whether you are preparing for cold and flu season or just looking to boost your body’s defenses, talk to your chiropractor about how using nutrition and natural supplements can help you reach your health goals.