Could you benefit from chiropractic care?  From headaches and back pain, to improving athletic performance, to lifestyle and nutritional advice, to just getting back to your favorite daily activities, the right chiropractor is a great partner for you in health and wellness. Learn more about how chiropractic can be beneficial for you and your family.

What to Expect on Your First Chiropractic Visit

Many new patients are not sure what to expect during their first appointment with a Doctor of Chiropractic (DC). Chiropractors start by taking a patient’s history and then performing a physical examination to develop a working diagnosis. Imaging or lab tests (such as MRI, CT scan or X-ray) may be used to confirm a diagnosis.

The combination of the history, exam, and diagnostic studies will enable your doctor of chiropractic to reach a diagnosis, which will help him or her to determine whether chiropractic services are appropriate for your condition. If your doctor determines you would be more appropriately managed or co-managed by another health care professional, he or she will make the proper referral.

Through a process of shared decision-making, you and your doctor will determine if chiropractic services are right for you. As part of this process, the doctor will explain your condition, recommend a treatment plan and review the risks and benefits of all procedures.

Based on the extent, timing or severity of the patient’s condition, chiropractic interventions may require several visits. Patients may also receive advice on home care, lifestyle modifications, exercise instruction and nutritional advice.

Find a TCA member doctor near you by clicking here.

Key Facts about the Chiropractic Profession 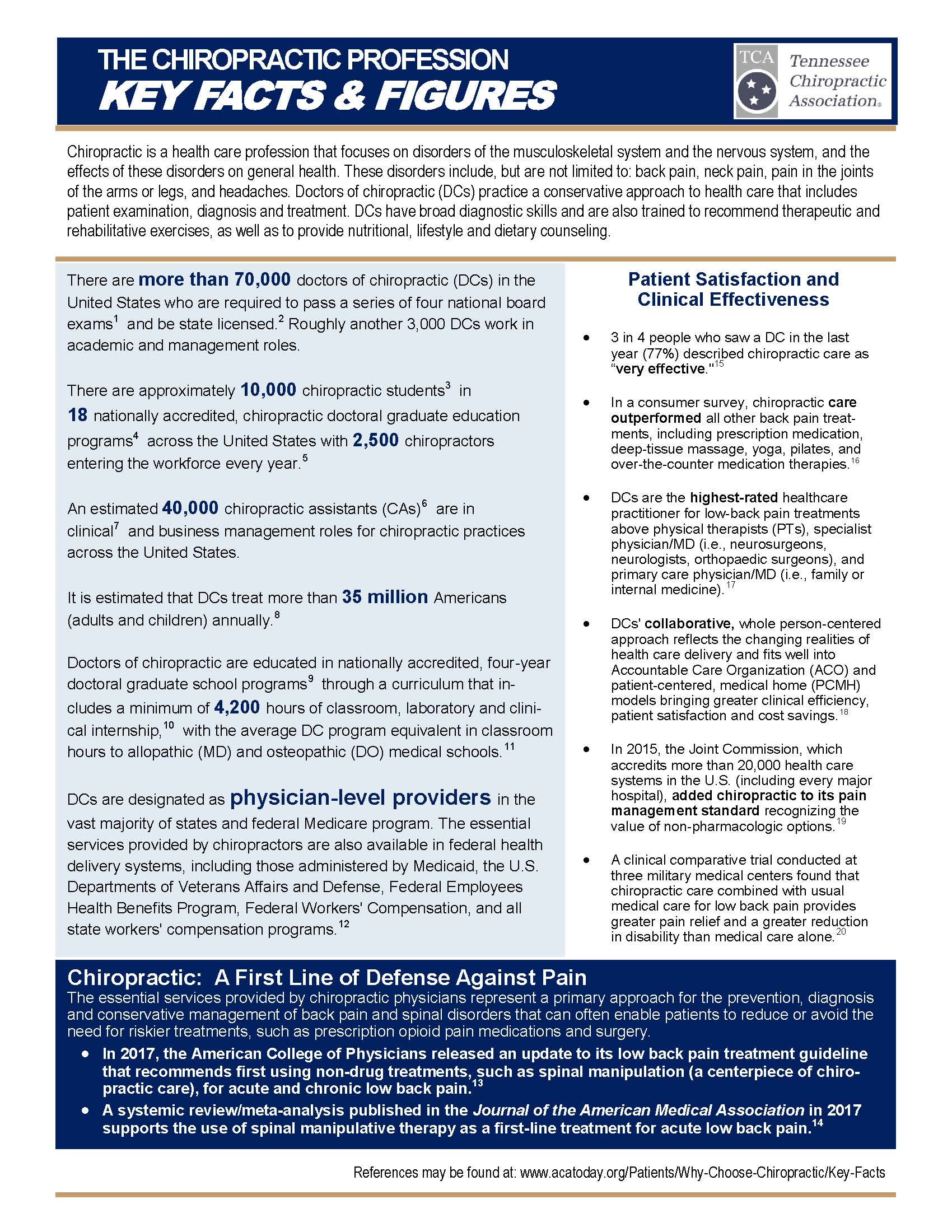 Learn More on What Research Shows about Chiropractic

A growing list of research studies and reviews demonstrate that the services provided by chiropractic physicians are both safe and effective.  Following are excerpts and summaries from a few of those studies. The evidence strongly supports the natural, whole-body and cost-effective approach of chiropractic for a variety of conditions.

“Many treatments are available for low back pain. Often exercises and physical therapy can help. Some people benefit from chiropractic therapy or acupuncture.”

“[Chiropractic Manipulative Therapy] in conjunction with [standard medical care] offers a significant advantage for decreasing pain and improving physical functioning when compared with only standard care, for men and women between 18 and 35 years of age with acute low back pain.”

Comparing Chiropractic to Other Treatments

“Reduced odds of surgery were observed for…those whose first provider was a chiropractor. 42.7% of workers [with back injuries] who first saw a surgeon had surgery, in contrast to only 1.5% of those who saw a chiropractor.”

“The number of migraine days significantly reduced for all three groups from baseline to post-treatment, while this effect continued for the chiropractic treatment group through all the follow-up time points. Furthermore, duration of migraines were significantly more reduced in the chiropractic than in the control pharmaceutical group toward the end of the follow-up period of the study.”

“Cervical spine manipulation was associated with significant improvement in headache outcomes in trials involving patients with neck pain and/or neck dysfunction and headache.”

In a study funded by NIH’s National Center for Complementary and Alternative Medicine to test the effectiveness of different approaches for treating mechanical neck pain, 272 participants were divided into three groups that received either spinal manipulative therapy (SMT) from a doctor of chiropractic (DC), pain medication (over-the-counter pain relievers, narcotics and muscle relaxants) or exercise recommendations. After 12 weeks, about 57 percent of those who met with DCs and 48 percent who exercised reported at least a 75 percent reduction in pain, compared to 33 percent of the people in the medication group. After one year, approximately 53 percent of the drug-free groups continued to report at least a 75 percent reduction in pain; compared to just 38 percent pain reduction among those who took medication.

Findings from a study utilizing data from the North Carolina State Health Plan collected between 2000-2009 show that care by a doctor of chiropractic (DC) alone or DC care in conjunction with care by a medical doctor (MD)  incurred “appreciably fewer charges” for uncomplicated lower back pain than MD care with or without care by a physical therapist.

Low back pain initiated with a doctor of chiropractic (DC) saves 40 percent on health care costs when compared with care initiated through a medical doctor (MD), according to a study that analyzed data from 85,000 Blue Cross Blue Shield (BCBS) beneficiaries in Tennessee over a two-year span. The study population had open access to MDs and DCs through self-referral, and there were no limits applied to the number of MD/DC visits allowed and no differences in co-pays. Researchers estimated that allowing DC-initiated episodes of care would have led to an annual cost savings of $2.3 million for BCBS of Tennessee. They also concluded that insurance companies that restrict access to chiropractic care for low back pain treatment may inadvertently pay more for care than they would if they removed such restrictions.

Widespread Use of Chiropractic

“Chiropractic is the largest, most regulated, and best recognized of the complementary and alternative medicine (CAM) professions. CAM patient surveys show that chiropractors are used more often than any other alternative provider group and patient satisfaction with chiropractic care is very high. There is steadily increasing patient use of chiropractic in the United States, which has tripled in the past two decades.” 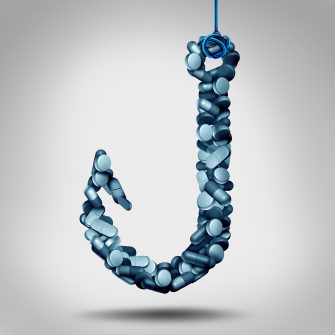 Each year in Tennessee: More opioid prescriptions are written than there are people living in our state, with more than 1 million prescriptions left over.
Each day in Tennessee: At least three people die from an opioid-related overdose which surpasses the number of daily traffic fatalities.

Chiropractic care is a first-line, drug-free and cost-effective health care pain management approach, yielding high patient satisfaction scores. A study by the Alternative Medicine Integration Group found that patients using chiropractic physicians as their first mode of treatment demonstrated a 60.2% decrease in in-hospital admissions, a 62% decrease in outpatient surgeries and procedures, and 85% decrease in pharmaceutical costs.

The Tennessee Chiropractic Association urges legislators, insurers and employers to lead the fight to put chiropractic and other non-pharmacologic options as the first line of defense.

Doctors of chiropractic – who receive a minimum of seven years higher education – are specifically trained in clinical evaluation and diagnosis. They provide non-pharmaceutical care and rehabilitation to individuals suffering from acute, subacute and chronic back, low back and neck pain, headaches, neuro-musculoskeletal conditions and other related syndromes.

Choose Chiropractic Care First!  Click here to find a doctor near you.

Simply click on the images to view these brief videos on how chiropractic care can improve your health and help end the opioid epidemic.  To view our full library on informative videos, click here. 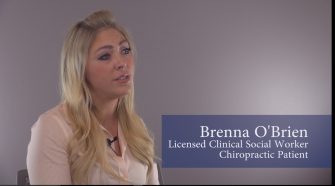 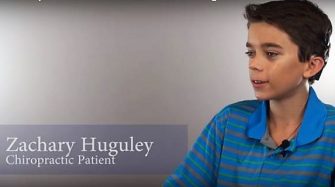