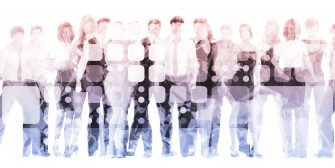 In recent years there have been numerous studies detailing the negative effects of the opioid crisis. By 2014, opioid prescriptions written and filled reached almost 245 million. That’s practically 1 opioid prescription per adult in the US!

The staggering increase in opioid prescriptions has been accompanied by higher rates of opioid abuse, addiction, and overdose as well as other health care services, such as emergency room visits and specialized neonatal care to manage conditions like neonatal abstinence syndrome.

Most research has focused on the users’ health and their families. To date, little research has been conducted to evaluate the effect this has had on the labor workforce. There are clinical situations where opioids are medically appropriate and have legitimate usage for pain treatment. In some cases, they may actually help some patients continue to work. However, when taken in excess or for reasons beyond the initial prescription purpose, the negative consequences can be significant.

Researchers at the University of Tennessee, Department of Economics and Boyd Center for Business and Economic Research, conducted a study to examine the effects of opioid usage on the workforce at a county level – including labor force participation rates and unemployment rates. The final report was released in March, 2018.

The researchers noted that while alcohol and other illicit drugs may also have an impact, the effects of opioids differ primarily due to how the substance is acquired, the reason for initial usage, and the level of acceptance in social settings.

For the purpose of the study, the prescription drug monitoring program (PDMP) databases of 10 US states from 2010 to 2015 and county labor market data from the Bureau of Labor Statistics (BLS) were utilized. The study recognized that patients taking opioids for medical issues (i.e. immediately after surgery) are at high risk for developing dependence, and many opioids are “diverted” from the original patient to other friends or family members who consume the drug for alternative reasons. This information would be nearly impossible to detect using an individual analysis, but by looking at prescribing and work force data for a county, the effects can be seen.

Once initial analysis was complete, they analyzed data from the Drug Enforcement Administration’s Automated Reports and Consolidated Orders System (ARCOS), which contains data from 2000 to 2016 for all US states and Washington DC. Despite the significant difference in data source (16 years vs 5 years and 50 states + D.C. vs. 10 states), the findings were very similar, indicating that the trends that were revealed are not the result of an erroneous method.

Labor statistics show that when a person leaves a job (regardless if it is voluntary or not) the employment-to-population ratio will decrease. If that person continues to look for work, then the unemployment rate will increase. However, if the person does not seek employment, but instead leaves the workforce entirely, (such as for retirement or to take full disability) then the labor force participation rate will decrease.

The study, which looked at county-level data from across the US, found that a 10 percent increase in opioid prescriptions per capita led to a 0.6 percentage point drop in labor force participation rates and a 0.1 percentage point increase in county unemployment rates. This is an indication that opioid users are exiting the work force rather than finding new jobs.

Researchers note this appears opposite to the effects of Cox 2 inhibitors, also prescribed for pain management, but not used recreationally.

In examining the counties, they found no significant difference between relatively rural and non-rural counties. However, they did find that counties that were most affected were those with higher labor force participation rates and employment-to-population ratios, but lower unemployment rates.

When they excluded statistics from the three states with the highest average per capita opioid prescriptions, the results were even more dramatic. Researchers theorize that this may be an indication that in the higher opioid states (including TN), significant damage to the work force may have already been done.

This study is the first of its kind to address the potential effects of opioid prescriptions on county and regional labor market outcomes. While opioid usage is appropriate in some situations, the increasing degree of abuse has drastic consequences for the job market.

Statistics show that opioid usage is associated with individuals leaving the workforce altogether. Additional studies will have to be conducted to determine to what degree this is due to health issues that lead to a person going on disability, and what is due to individuals who leave the workforce due to the effects of abusing opioids.

The negative effects on the labor market indicate that the opioid epidemic is now affecting economic growth, the tax bases of local economies, and the amount of resources available to provide for and train those who are up and coming. This knowledge should assist leaders in the labor industry in understanding the opioid crisis, and lead to more collaboration with the health care industry on finding better ways to contain the epidemic, such as chiropractic care and other non-opioid approaches, to prevent more from falling victim to it.

Chiropractors are highly-skilled and already working to help combat opioid abuse. Chiropractic care is both safe and effective for treating many types of pain. Therefore, chiropractic can assist patients in reducing or even eliminating the need for pain medication – especially opioids.

By working in conjunction with other health care providers, chiropractors can help a drug dependent patient to regain control of pain without opioids. For those who are at the onset of treatment, utilizing #chiropractic1st may serve to prevent the person from taking even that first dose.

Experts in the musculoskeletal system and workplace ergonomics, doctors of chiropractic can help employees and employers to identify potential hazards and reduce the number of workplace injuries.   Additionally, with their training in wellness, chiropractors can help educate the community about better health choices to improve quality of life, and prevent illness as well as injury.

If you or a loved one is experiencing pain, new or chronic, schedule an appointment with your local chiropractor to see how they can help you eliminate or reduce pain and achieve a healthier lifestyle. If you do not have a local chiropractor, you can find one near you at https://www.tnchiro.com/find-a-doctor.